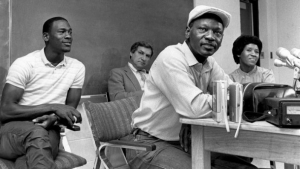 Demery was sentenced in 1996, along with childhood classmate Daniel Green, for the shooting death of James Jordan, who was sleeping in his car in Robeson County in North Carolina.

He was spared the death penalty when his attorneys argued that he did not pull the trigger and felt remorse over the crime. Demery pleaded guilty and turned state’s evidence against Green, who denied the crime and is still seeking his release.

In a short statement, the state Post-Release Supervision and Parole Commission announced it had approved Demery for a vocational and scholastic program known as MAPP, or Mutual Agreement Parole Program. His release date is set for Aug. 6, 2023.

As a rule, the commission does not discuss reasons for granting parole. But Demery was sentenced under different guidelines. Convicts serving life sentences for murder are no longer eligible for parole unless their crimes were committed before Oct. 1, 1994.

Estee Portnoy, Michael Jordan’s longtime manager and spokesperson, said in an email to The News & Observer and Charlotte Observer that Jordan has no comment on Demery’s parole.

Green has long sought a hearing to prove his innocence and seek a new trial, which a North Carolina judge rejected last year. His attorney Christine Mumma, director of the N.C. Center on Actual Innocence, said that effort continues.

She said Tuesday that Green and Demery were sentenced very differently, allowing for Demery’s release to be considered.

At the time, she said, Demery had a longer criminal record including robbery and felony assault. But though Green’s prior record was shorter, Demery was to serve his sentences concurrently rather than consecutively as did Green.

That arrangement was not allowable by state law at the time, she said, so Demery’s charges were consolidated in 2008. Having release as an option suggests a quid pro quo.

“I am absolutely confident there was a deal,” she said.

Demery was 17 when James Jordan died.

At his 1996 trial, prosecutors argued Demery and Green killed Jordan at random, not knowing he was Michael Jordan’s father, at the end of a month-long string of crimes.

Demery testified that he watched Green shoot Jordan, then helped dump the body in a South Carolina swamp.

“Larry Demery was not armed, did not point a weapon, did not shoot Mr. Jordan or shoot at Mr. Jordan,” his attorney Hugh Rogers told jurors at the time. “After (Green) shot Mr. Jordan, Larry asked him, ‘What did you shoot him for?’”